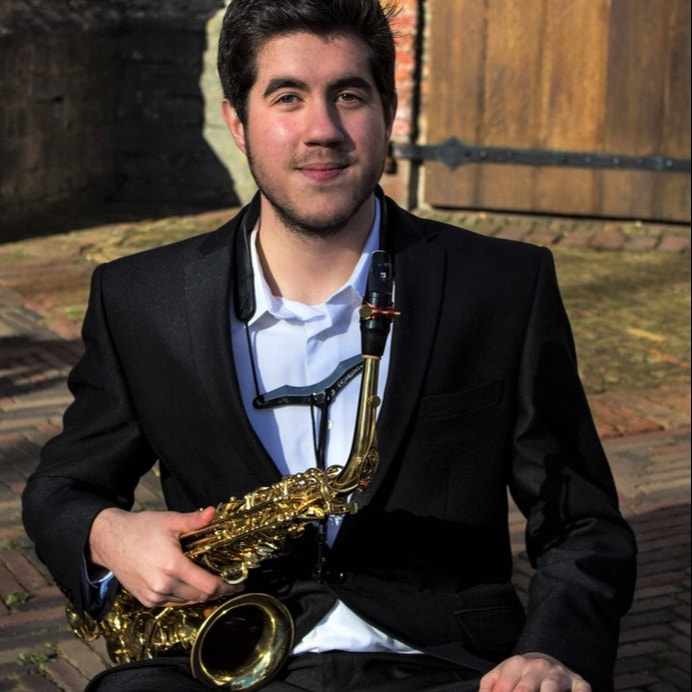 Simão Ramos Portuguese saxophonist (1997). He began to play saxophone in the Covilhã Band in 2012 and in that same year he began to study at EPABI (Escola Professional Artes Beira Interior), under the direction of Tiago Gonçalves and concluding the course in 2015.
He has participated in several masterclasses and workshops with Claude Delange, Vincent David, Arno Bornkamp, ​​Christophe Grèzes, Fernando Ramos, Henk van Twillert, Mario Marzi, Ties Mellema, Nascho Gascón, Joseph Murphy, Tommy Macalist, Gerard Mccrystal. Throughout his career he also participated in various stages and orchestra workshops conducting by Luis Clemente, Francisco Luis Vieira, Francisco Sequeira, João Cerqueira, Francisco Ferreira, Jan Cober and Alex Schillings. He also participated for 2 years in the Big Band of EPABI.
During these years, he has participated in several concerts and contests with the EPABI Wind Orchestra, especially the VIII Beira Interior Music Festival in 2013, the international competition "Filarmonia D'Ouro", in Europarque. In the year 2014, he played solo with the quartet, the "Saxtory" work of Jérôme Naulais, with EPABI wind orchestra.
Over the years he has been participating in several international saxophone festivals, as FISP (Festival International Saxophone Palmela), Saxophone festival Amsterdam, Andorra Sax Festival. In 2017 started working with a Reed Quintet "IpsoFacto", where he had  opportunity to work with the Calefax.
In 2015 he was admitted to the Royal Conservatory of The Hague in the class of Raaf Hekkema, where he is currently.
Go Back