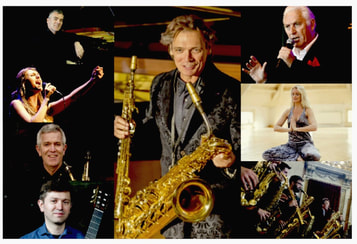 The successful series 'Henk van Twillert in Concert', in which saxophonist Henk van Twillert invites artists to play together in several special locations of Stadsherstel Amsterdam, will be followed up for the year 2018. The combination of virtuosic music within a monumental ambiance ensures that you will experience memorable moments. ​
The series opens with the expressive deep baritone voice of Marco Bakker. Together with Henk van Twillert on his beloved baritone saxophone and the tasteful accompaniment of Tjako van Schie on the piano, it guarantees an unforgettable afternoon.

The successful saxophone ensemble Vento do Norte from Portugal has now been programmed with the program of their American tour "Once Upon a time ..." In combination with New York-based duo Montagnard, consisting of saxophonist Joseph Murphy and guitarist Matthew Slotkin. Henk van Twillert will take you to distant winds.

The closing of the 'Henk van Twillert in Concert' series is dedicated to the Portuguese national holiday. Besides fado singer Daisy Correia there will be on stage a choice of Portuguese artists where "Saudades" will predominate.

After each concert there is an opportunity to chat with the artists while enjoying a nice glass of wine.